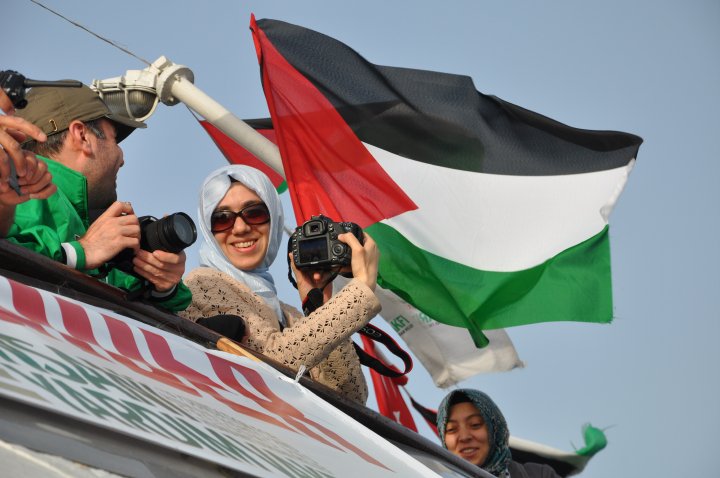 Two ships, Amal and Zaytouna, will sail in mid-September in order to reach the Strip on October 1st and challenge the Israeli blockade.
On a boat there will be Nobel Prize winner Mairead Maguire

“Women’s boat” is going to sail in mid-September towards Gaza. They want to reach the Strip on October 1st. A female crew is going to lead two boats, “Amal – Hope” and “Zaytouna – Olive”, in order to challenge the illegal blockade that Israel has established on the panhandle where 1.8 million people are trapped. Here Palestinians are living isolated from the world, in a sort of limbo, in humanitarian emergency, without any chance to receive aid from other countries, except what is allowed by Israeli government.

As it has happened during previous Freedom Flotilla’s expeditions, aimed to break Israeli siege and reach Gaza by sea, “Women’s Boat to Gaza” project activists are expecting a violent reaction from Israeli Occupation Forces (IOF).

«To be honest, we don’t think Israeli navy will be less aggressive and violent towards a female crew. We certainly hope so, and one of the most important aspects of our project is to emphasize that we are peaceful, but we also know the track record of the IOF and really are awaiting the same brutal treatment as those who have gone before us», Freedom Flotilla activist Wendy Goldsmith states. Goldsmith is also a member of the International Media Committee and the Canadian Boat to Gaza Steering Committee.

The port the boats are going to sail from has not been disclosed yet but it will be somewhere in the Mediterranean sea: «We will stop in several ports before setting sail towards Gaza.  We intend to reach the Strip on October 1st. Two boats will make the final leg towards Gaza.  Before that, many ships will sail alongside of us as we raise awareness about Gazans’ condition».

The names of the crew members have not been released yet but the organizers have confirmed that they will have an international representation from women. The crew will be made up of strong sailors and women who oppose the illegal blockade.
Confirmed delegates include Nobel Laureate (1976) and peace activist from Northern Ireland, Mairead Maguire, and Green Party New Zealander member of Parliament Marama Davidson.
«Other delegates will be announced in the coming weeks. We will stop in several ports before setting sail towards Gaza. We have not released the names of the harbors where we will dock yet, but we can say that there will be three or four within the Mediterranean sea», Wendy says.

At every port where the activists dock, they will be collaborating with local organizations, particularly with women’s groups to hold awareness raising activities and to ask people to sail with them to the next harbor.

“Women’s Boat to Gaza” project activists organized a competition to name the boats: «Amal symbolizes the hope that we will bring to the shores of Gaza and Zaytouna refers to the mighty olive, the tree of life in Palestinian agriculture.  We intend to carry the spirit of Mother’s Day, originally an anti-war campaign, forward with our mission».

International public opinion is interested in “Women’s Boat to Gaza” project. Israeli occupation is an issue that is generally ignored, underestimated and, sometimes, mistaken by mainstream media. Thanks to the combination of global strategies being used to attempt to end the illegal blockade, including BDS (Boycott, Divestment and Sanctions) and land actions, activists are raising a collective voice.  «Our project – Goldsmith declares – is unique in the sense that it highlights the female role in the Palestinian struggle and connects women in Gaza with other women around the world.  There is a great and often untapped wisdom in the connectivity of women and this project will emphasize and foster these connections long after the boats have sailed».

“Women’s Boat to Gaza” project aims to break the illegal blockade of Gaza.  The organizers believe they can do it. Beyond that, their desire is to create connections, share their hope, their resolve and their commitment with the resilient people in Gaza, while raising awareness about how Western governments are complicit in the ongoing destruction of an entire population.

Many activists and scholars believe that Israeli occupation is comparable to the apartheid policies of pre-1994 South Africa. «If you look at the origins of the word “apartheid” – Goldsmith explains – you will note that it means a policy or system of segregation or discrimination on grounds of race. The apartheid wall between Palestine and Israel is a clear indication that Tel Aviv government has created an apartheid state. Desmond Tutu, South African Anglican bishop, Nelson Mandela’s friend and 1984 Nobel Peace Prize winner, says of the Palestinian struggle for liberation: “Since 1967 Israel has arrested over 850,000 Palestinians in the most striking example of mass arbitrary arrest in contemporary history. It has arrested leaders, militants, academics, journalists, children, women, the elderly and human rights defenders in an attempt to break the will of an entire people striving for freedom and independence”».

Non-violent international campaigns such as Freedom Flotilla and “Women’s Boat to Gaza” project are effective in the struggle against Israeli occupation because they show the world that there is another way, beyond violence, to speak truth to power and show solidarity with the oppressed:  «When we act this way, we are operating outside of the dominant paradigm of control and coercion and we are saying that acceptance and understanding are the true path to save this planet from self-destruction».

Some weeks ago “Women’s Boat to Gaza” activists held a meeting at European Parliament in Brussels and planned their next steps in the mission: «Details regarding delegates and route itinerary will be made public shortly.  We were thrilled to meet many members of European Parliament who fully support our efforts.  We have asked them to speak about our project within their constituencies, we will ask them to sign on to a declaration of support and some of them will join us on the boats».