The role of Women in the Palestinian Popular Resistance 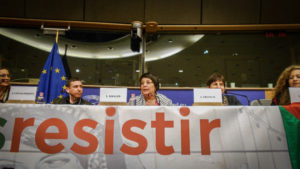 On 26 September the conference, ‘The role of women in the Palestinian Popular Resistance’ took place in the European Parliament, with more than 90 people including representatives of Women’s Boat to Gaza and the Freedom Flotilla in attendance. The conference was organized by the Unadikun Association and two Members of the European Parliament: Ángela Vallina and Javier Couso (Izquierda Unida – GUE/NGL MEP Group of European Unitarian Left / Nordic Green Left). 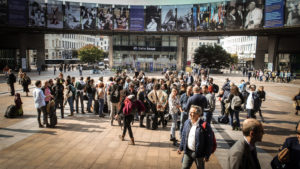 Conference participants at the entrance of the European Parliament

Saha Francis, lawyer and director of Addameer, and defence lawyer of Khalida Jarrar (a Palestinian parliamentarian who had been invited to the conference, but unable to attend as she is under administrative detention (http://www.addameer.org/prisoner/khalida-jarrar); and Ahed Tamimi, who despite being only 16 years old has been an activist against the Israeli settlers in Palestine for several years.

Vallina and Couso highlighted the fundamental role of women in the Palestinian resistance, although their role is systematically hidden. Palestinian women have shown that they stand at the vanguard of the defence of the Palestinian people, despite the many conditioning factors, both internal and external, that try to relegate them to other places. They stand in the front line of the conflict, playing a role of social cohesion, ready to make sacrifices so that their children may have a better future. They are involved in the economic struggles that are indispensable for a free Palestine, a more just society and a state of their own.

Manu Pineda, from Unadikun, emphasized the key role of women in the fight against settlements, confronting the settlers, who represent by far the most violent side of the aggression of the Zionist state. He demanded that the European Parliament, “instead of making empty declarations, impose sanctions against the occupying power.”

Ahed Tamimi reminded us that “the struggle of the Palestinian people 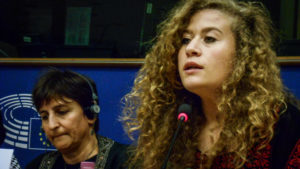 Ahed Tamimi, human rights defender, during her speech at the conference

against occupation is something that must involve everyone”, drawing a parallel between present Palestine and the historical Apartheid in South Africa. She stressed that Palestinian women constitute the core of Palestinian society because it is they who bring up children and pass on their experience to new generations. Theirs is a key role in the resistance against occupation, and because of this they must remain strong and free, for “if women are strong, so will men”. She went on to say that “the Palestinian mentality can become a victorious mentality.” 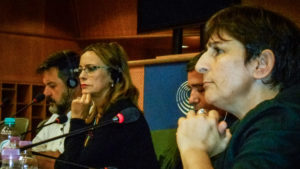 Saha Francis, lawyer and director of Addameer in the foreground, Ángela Vallina in the background

Saha Francis explained in her speech that what made her become a defender of the rights of Palestinian people is her desire to prosecute Israeli criminals at international courts. This was the reason that she studied Law at an Israeli university “under the logic of using that law in the occupying state”, despite her belief that “international laws have been written to defend the strong powers.”

She also made clear the injustice  of the persecution against the Palestinian people from the point of view of imprisonment and trial in Israeli courts without proper guarantees. She drew attention to “administrative arrests”, like that of Khalida Jarrar, imprisoned for her “struggle in favour of feminism, her defence of the role of the woman and her right to freedom.”

Addressing a question about United Nations’ resolutions, she replied that the number of illegal settlers, as well as the number of people arrested and the oppression keeps increasing. She went on to appeal for international help, “in order to press the governments who measure the Zionist state with a different yardstick.”

Leila Khaled reassured the conference that despite the years that have passed and the difficulties she has faced, she must keep on fighting, because victory will only be achieved through fighting. In her own words “it is the woman who gives life, and therefore she is the most capable of defending it, the one who makes humanity go on, and this is why I am proud of being one.”

She added that “freedom cannot be shared nor divided … there won’t be peace as long as there is one single Zionist in Palestinian land”, and she blamed the Zionist movement for attempting to appropriate the right to grieve and pretending to be the victims. She pointed out that capitalism and Zionism walk hand in hand, denouncing the union between Israel, the U.S. and the European Union, as well as the concessions that they make to each other whenever Israel makes a threat in order to get something. “If we don’t go beyond this point the situation will be disastrous, but injustice cannot be eternal in the history of mankind. It cannot last one hundred years. It is impossible.”

With reference to the fact that the PFLP is included in the lists of the EU as a terrorist organization, she observed that while such lists consider the members of resistance as terrorists, she viewed the people present in the hall as friends. “We are people who love life and peace, but justice must prevail. There is no peace without justice.” In conclusion, she demanded the end of the occupation, as no peace is possible without liberating the territory. She demanded our governments act and to cease labelling members of the Palestinian resistance as terrorists.

At the end of the speeches, and after a long standing ovation, it was the turn of the participants at the conference. Michael Collon, journalist specializing in techniques of ideological manipulation used in the media, pointed out that the occupation of Palestine is “the last act of colonialism in the world”. An economic and strategic war is being carried out in the Middle East, covered up under the five principles of war propaganda, namely:

to hide economic interests; to hide the historical facts of the Nakba, which is the biggest taboo subject in the European media; demonizing and dehumanizing Palestinian people;
inversion of the aggressor and the victim; and monopolization of the debate, to prevent people listening to the two versions and deciding which is fairer.

In Michael Collon’s opinion, BDS (boycott, divestments and sanctions) is the natural response to help the Palestinian resistance. 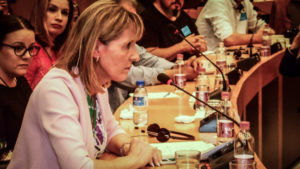 Martina Anderson, MEP, speaking at the conference on the role of Palestinian women in the resistance 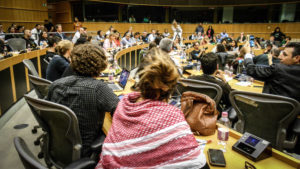 The next speaker was Martina Anderson, MEP, (member of Sinn Féin), a former political prisoner of eleven years. She highlighted the long struggle of solidarity of Sinn Féin towards the Palestinian people, since Palestine and Northern Ireland share a common experience of occupation, oppression and discrimination. She reminded us that 2 November is the hundredth anniversary of the Balfour Declaration, issued by the British Government, creating division and being the cause of occupation in Palestine, the same as they did in Ireland. In spite of this, “in Ireland we made the impossible possible, the same as you will do”. The Palestinian resistance counts on the support of millions of people, rather than right-wing governments. She added that Sinn Féin has demanded that the agreement of association between the EU and Israel be suspended, and has called for support for BDS in Ireland. She asserted that BDS is a useful strategy, as it is detrimental to the economic interests of Israel as it informs people on which goods should be bought and which should not to support Palestinian people. Lastly she stressed that between 2012 and 2017, Israel has denied access to the Gaza Strip to all MEPs from the ‘Left’ group. The Venezuelan Ambassador to the EU, Claudia Salerno spoke next, expressing her admiration for the struggle of the Palestinian people and explained how this struggle set an example for the Bolivarian revolution. Hugo Chavez took the Palestinian cause as his own and since then Venezuela has never stopped to fight for Palestine. Likewise, she informed that since last year Venezuela has held the presidency of the Movement of Nonaligned Countries (MPNA or MNOAL), and that together with the rest of the chancellors, it was decided that Palestine would be the central issue. On 19 September, Venezuela called a chancellors’ meeting, and the most important conclusion of all was the issue of justice, “that all those held responsible be identified and taken to trial, that international trials be held against those guilty of the massacre which is being carried out against the Palestinian people.”

In 2016, the Movement of Nonaligned Countries made the decision that 2017 should be the year of the end of the occupation, and she reminded us that the year has not yet ended.

In a jocular mood she explained how while she was Ambassador for Climate Change she was appointed to prepare the introductory text of the Paris Agreement, which contained the conditions regarding issues of gender, human rights etc.… where she suggested to include the term “occupied territories”, the suggestion was rejected but in exchange Palestine would be allowed to join the Plenary Assembly, as state number 197 in their own right. And indeed that happened. She concluded, reiterating that as President of the Committee for the Decolonization in the UNO, the central issue is the Palestinian cause.

There were representatives of the French Jewish Union for Peace among the public, and one of them spoke in favour of BDS, emphasizing that European leaders are accomplices of Israel, and pointing at our duty to make our governments change their policies about Israel.

The last speaker was Hadi Shebe, deputy of the Palestinian Mission in the EU, who thanked the conference organizers, Leila Khaled for being present, and the Venezuelan Ambassador for her support for the Palestinian cause. He remarked that for the last ten years he has been trying to force the EU and the US to reconsider their vision of Palestine and Israel. He emphasized that if the Agreement of Association with Israel is not suspended, or if sanctions against Israel are not applied, at least they should stop supporting the occupation, so that Palestinians can live free after over fifty years of occupation and eighty years of being refugees and deportees.

The session was brought to a close by Javier Couso, who remarked that he first arrived at the European Parliament in 2014, when there had already been more than five hundred children killed by the Israeli attacks on the Palestinian people of the Gaza Strip. They demanded in the plenary session a condemnation against the attacks, a visit to the strip, and a demand to Israel for explanations concerning the destroyed infrastructure works which had been built with European funds. Unfortunately there were four hundred votes against the proposal.

“Here, today, has sounded the voice of the resistance. Long live Palestine”, he concluded.

The conference endorsed the content of a letter about the situation in Gaza which the Freedom Flotilla Coalition had send to the UN secretary general, Antonio Guterres in October.