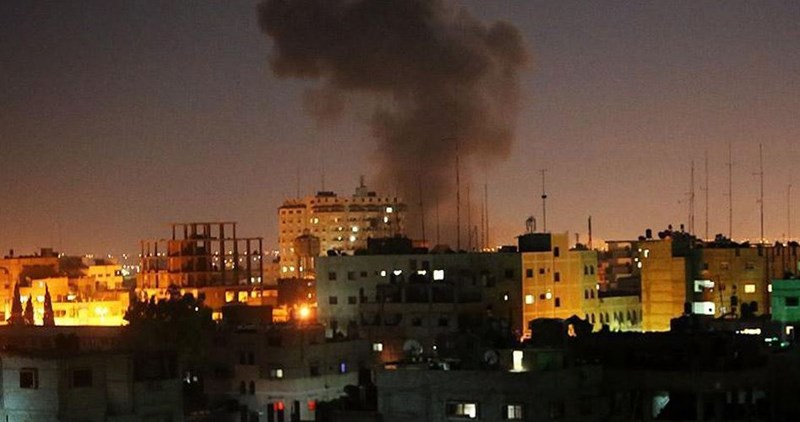 Wafa Aludani, coordinator of the Foreign Media Unit in Al-Thorayya in Gaza woke suddenly early Monday morning to the sounds of dozens of Israeli F-16 jets and missiles.

She could hear massive explosions across the Gaza Strip, but especially near Beit Hanoun. She told me in a short interview that three of the five people hurt by the bombs were young children, one boy aged 17 and an adult man. She did not know if this was the beginning of a new war initiated by the Israeli Occupying Forces (IOF) or just on of the regular sudden, quick strikes. According to Haaretz a senior official from the IOF said that the army targeted what they described as Hamas `infrastructure` and hit 30 sites in Gaza belonging to Hamas, Islamic Jihad and other militant groups. They called the attack `rare` as opposed to the ‘ordinary’ war strikes of Operation Cast Lead (2008-2009), Operation Pillar of Defense (2012) and Operation Protective Edge (2014). According to the Israeli propaganda, these attacks were merely defensive operations and not wars, yet they killed thousands of civilians and destroyed peoples’ homes and schools and their water and electricity supplies.

As usual the IOF states that its airstrikes were a response to Gaza attacks on Sderot in the very south of Israel, which caused no injuries or material damage. According to Haaretz, a local group in Gaza that identifies with ISIS’s ideology – and which is seen as a challenge to Hamas – claimed responsibility for the rocket fire. If correct, then perhaps it corresponds with the aim of the IOF to create chaos in Gaza, and gain a justification to start another major assault against the Hamas government even though it was not responsible for firing rockets into Israel. Maan news reported the Israeli bombardment, adding a statement from the Fatah movement’s military wing, that it would defend Gaza against Israeli attacks. A spokesperson of the armed wing of the Democratic Front for the Liberation of Palestine (DFLP) called upon all  Palestine people to remain united in the face of Israeli violations and attacks.

A Hamas spokesperson said that Israeli escalations are an attempt to create a new situation, but Israeli aggression will not break the will of the Palestinian people. Wafa meanwhile told me that the more that the Israelis strike, the stronger the resistance grows against the Israeli bombs and their will to live on their land, although they are tired after 10 years of Occupation and the illegal blockade.