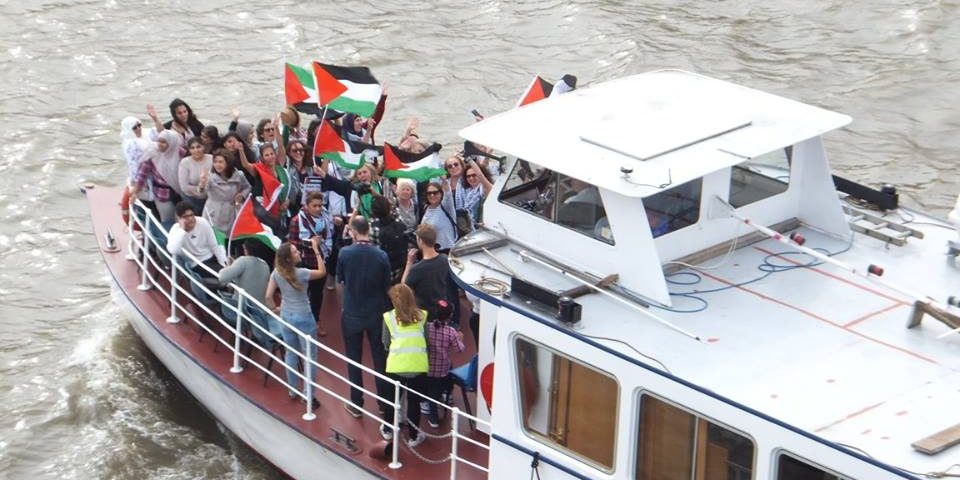 Women speaking out on the ‘Solidarity Sail’ on the River Thames, London in support of the Women’s Boats to Gaza.

On 24 September, in London, activists and supporters sailed on the River Thames in solidarity with the Women’s Boat to Gaza (WBG). The WBG is an initiative launched on International Women’s Day this year, aiming to raise awareness of Palestinian women’s role in resistance and the survival of the Palestinian people as a whole.

The WBG will sail from Messina Italy to Gaza to denounce and break the illegal and inhumane siege on Gaza and is due to arrive in early October. It will be entirely crewed by women who have arrived from all over the world to participate. Notable participants include Nobel Peace Laureate Mairead Maguire (Northern Ireland), Marama Davidson, Green Party MP (New Zealand), Sameera Thwaifiya MP (Algeria), and Cigdem Topcuoglu, a professional Turkish athlete and coach who sailed on the Mavi Marmara in 2010 and whose husband was among the ten activists killed by Israeli forces on that voyage.

Vyara Gylsen, spokeswoman for the ICBSG-London (one of the organisers) said: “Women have gathered from all over the world in solidarity with the people in Gaza who are being prevented from accessing their most basic human rights and to highlight the role women play in their struggle for freedom”.

She added “We cannot be with the Women’s Boat to Gaza or with the people in Gaza, but today we showed that we are with them in spirit and are willing them on to reach Gaza safely.”

The event put on by the ICBSG, Palestinian Forum in Britain and the Olive Foundation attracted close to 100 men and women.

Shadia Edwards-Dashti, National Officer at the Stop the War Coalition said: “It is our duty as activists here in the UK to campaign to end the arms trading with Israel, that funds the brutal mass killings in Palestine. I am so honoured to be part of this women only solidarity event, where women dominate the space, lead the space, sail into the space for equality and justice. To show the women of Gaza that we know what you’re achieving and we admire you. You fight for freedom from Israeli oppression, not in spite of being women, but because you are women.”