MEPs speak out for WBG despite silencing by plenary Chairman 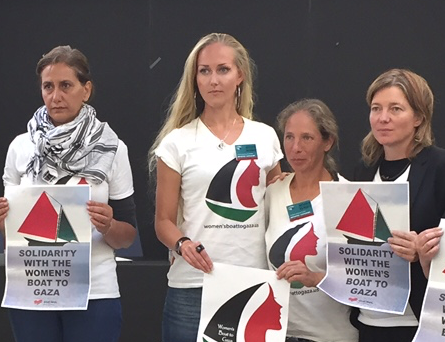 On the invitation of Members of European Parliament from the GUE-GNL group, Women’s Boat to Gaza representatives met with MEPs in Strasbourg on 4 and 5 October. Our request for MEPs to demand the safe passage of Zaytouna-Oliva was supported by 45 European parliamentarians, including our host in Strasbourg, Malin Björk, who accompanied the Zaytouna-Oliva on the first leg of her journey, from
Barcelona to Ajaccio.

However, during the 6 October plenary session on human rights, the chairman Alexander Graf Lambsdorff refused to give the floor to Pascal Durand, French MEP from the Green Party. He had asked to speak in defence of our peaceful mission and to oppose the Israeli attack on the Zaytouna-Oliva which had occurred the day before, in international waters. When Malin Björk attempted to raise the matter, she was cut off, supposedly based on a procedural rule which prohibits the addition of agenda items. She comments: “My goal was to inform all of the Members of the European Parliament that Israel once again had stopped a peaceful attempt to break the illegal blockade of Gaza. I also wanted to ask everyone to act for the safety and immediate release of my fellow Women’s Boat to Gaza activists.”

MEP Björk continues:  “the fact that the chairman cut my microphone off and did not allow me to finish speaking, is of course an attempt to silence the voices demanding peace and justice. But we will not be silenced. We will continue to work for an end to the illegal blockade and we will continue to show support for Palestinian women.”

The Freedom Flotilla Coalition and Women’s Boat to Gaza organizers are deeply disappointed by the negative attitude of the plenary chairman, which is in complete contradiction with the democratic values which the European Parliament is supposed to promote and protect. We are grateful to those brave voices which continue to speak up in Strasbourg, Brussels and elsewhere for Palestinian human rights and against the illegal blockade of Gaza. 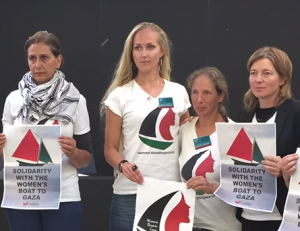